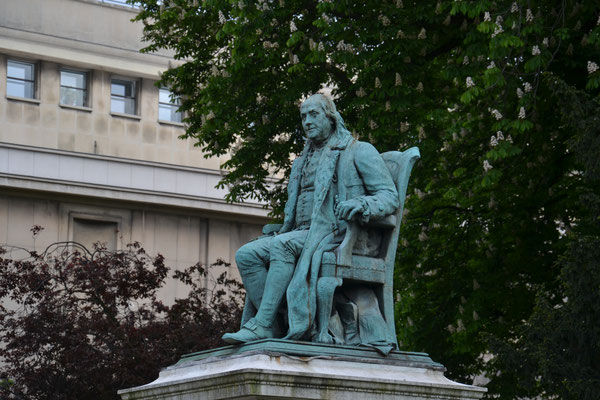 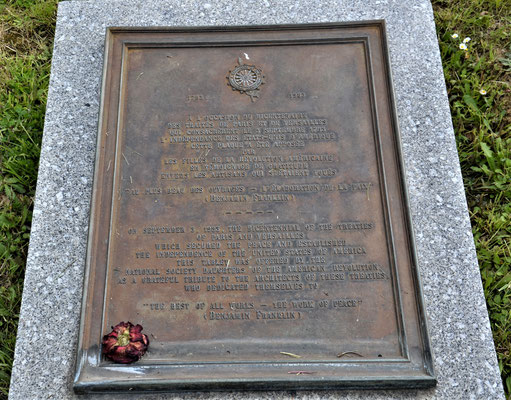 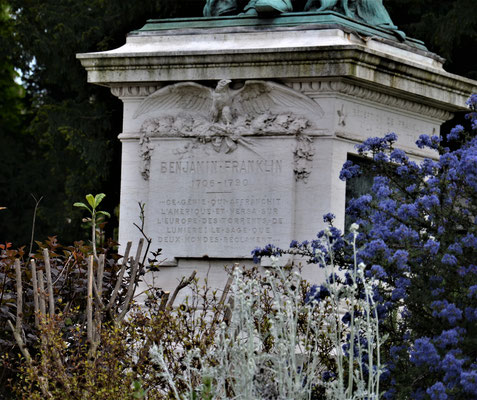 Rue Benjamin-Franklin is both recent and old. Located in the 16th arrondissement of Paris, it is a long and complicated street that branches off, divides, upper part, lower part, steeply sloping down towards the Seine.

It belongs to the Muette district, the name of which is said to originate from a hunting lodge belonging to Charles the IXth, King of France from 1560 to 1574.

The street, very banal, is complicated because first named rue Franklin it has been renamed in 1988, Benjamin Franklin, 200 years after its creation,. Its "very Parisian" enamel plaque in deep blue written in white letters, soberly presents the character (1706-1790): American physicist and statesman.

We will not tell an American audience who Benjamin Franklin was and how important he was in American political and scientific life. We will rather wonder about the French part of its existence. We will start with this tasty statement: Franklin Street, then Benjamin Franklin, was awarded in honor of the politician, diplomat, one of the founding fathers of the United States, and also, (and “above all” ?) as a former resident of Passy.

In truth, the wise American, sent to Paris to find there aid and subsidy in favor of the "separatists" was welcomed in 1777, in the Valentinois mansion, a very beautiful property overlooking the Seine owned by a French supporter of the American cause : Jacques-Donatien Le Ray de Chaumont, Grand Master of Water and Forest. He remained there until 1788. The Valentinois mansion, which was partially destroyed at the start of the 20th century, would be now located on rue Raynouard, a few hundred meters from rue Benjamin Franklin. The remains of the mansion bear a commemorative plaque in honor of the installation of the first Parisian lightning rod designed by the American scientist.

Franklin street which only received this title and this name, in 1791 was in 1730 noted on the maps of the surroundings of Paris, like a path which wound along the properties of a convent "the Convent of the Minimes of Chaillot ". In 1788, the layout of the street was final. It passed over the convent and took its name very for a short span of time: “rue Neuve-des-Minimes”.

The death of the great man, in 1790 in Philadelphia, gave rise in France to three days of national mourning decreed by the “Assemblée Constituante” installed in 1789. In 1791, the rue Neuve was renamed rue Franklin in honor of the one who had honored France for its presence.

Then Paris spread, the hill of Chaillot and its surroundings were absorbed in 1860 by its big neighbor, the commune of Paris; on its sometimes-vertiginous slopes were gradually built prestigious buildings, schools and administrative buildings.

The good Franklin would not have blushed at the transformation of the old country road into a street adjoining the Trocadero Palace where the famous Musée de l'Homme was located. The Palace overlooks the Seine and offers an exceptional view of the Eiffel Tower and the Champ de Mars, where major exhibitions of science and technology were held for a long time. It runs along Rue Franklin for a good hundred meters and exhibits magnificent high reliefs. A famous school, Saint-Louis De Gonzague, settled there in 1894 under the leadership of the “Compagnie de Jesus”, (otherwise known as "the Jesuits"). The school has been nicknamed after the first name of the Great Man: Franklin. Being taught at "Franklin" has been (and still is) a sign of a very high quality education. Did the educational virtues of Benjamin Franklin have anything to do with it? Other schools, Saint-Jean de Passy, Sainte-Marie de Passy (until 1970) were established in rue Franklin.

At the end of the street, there is a magnificent bronze statue.

Its base bears votive inscriptions and two bronze bas-reliefs. The sculptural work is a copy of that made by John J Boyle and installed in Philadelphia. It was offered by an American banker, John H. Haryes, in 1906. On the pedestal, two bas-reliefs by Frédéric Brou: one illustrates the reception of Benjamin Franklin at the court of France during his presentation to King Louis the XVIth in 1778, at Versailles, the other presented the signing of the Treaty of Paris in 1783.

On the front of the pedestal, there is a quote from Mirabeau, calling, on June 14, 1790, to celebrate the memory of Benjamin Franklin:

"This genius who freed America and poured torrents of light over Europe, the sage that two worlds demand ..."

In 1983, at the foot of the statue, a plaque was placed on the floor in memory of the bicentenary of the Treaties of Paris and Versailles, which enshrined the independence of the United States of America. It was donated to the city of Paris by the "Daughters of the American Revolution" and bears this quote from Benjamin Franklin: "the most beautiful of works: the making of peace".

It was gradually lined with apartment buildings, some of which have marked architectural history.

At No 17: a building constructed from 1929 to 1930 by the architect Marcel Hennequet in reinforced concrete, the facade of which is made up of bow windows and covered with an ocher terrazzo decoration, alternating with lines of white earthenware.

At No 25 bis: a building with a reinforced concrete structure (1903) built by the brothers Auguste and Gustave Perret announces the transition to Art Deco.

At No 8, the politician Georges Clemenceau lived from 1896 until his death in 1929 on the ground floor of a modest bourgeois building. Nicknamed the Tiger, Georges Clémenceau, formidable politician of the 3rd Republic, former Mayor of Montmartre, several times minister was "the man of victory" at the end of the "Great War" in 1918. A museum dedicated the heroe has been settled there.

And then the street went on a peaceful and quiet life.

Until this day of February 19, 1919, when it was rocked by a series of detonations. As Georges Clémenceau was leaving his home to go to the Ministry of War, he was the victim of an attack. The author, Louis Émile Cottin (1896-1936), a young 22-year-old was an anarchist who criticized Clémenceau in particular for having fought by force against the strikers in the war factories.

Émile Cottin fired nine times. Georges Clemenceau was hit by three projectiles and injured in the shoulder. Emile Cottin, sentenced to death, had his sentence commuted on the intervention of his victim.

It should now be noted that this famous Franklin Street is in good "geographic" company: a stone's throw (in the precise sense of the term) from Yorktown Square, a few hundred meters from President Wilson Avenue and the statue of Washington that has been erected in the midst of the avenue, it is not far from Kennedy Pier. A little further on, the Statue of Liberty lights up the world, planted at one end of Swan Island.